How to find the Cheapest Flight Fares to India

Discover and compare cheap flight fares and flexible date options to India, New Delhi Indira Gandhi International Airport, DEL in 2022/2023 with FlightsFinder departing from the United Arab Emirates as well as the rest of the world. The GEO coordinates for New Delhi Indira Gandhi International Airport are 28.56649971, 77.10310364, located in the country of India. To find the cheapest flight fares to India simply enter the departure airport you wish to fly from and then choose your travel dates. The more flexible you are with your travel dates the cheaper your flight fare to India can potentially be. We give you the ability to look for flexible flight fares to India 3 days before and after your travel dates or if you prefer you can browse our powerful flexible flight calendar to see prices in the entire month or even the entire year of 2022/2023. Once you have identified the cheapest days to fly to India simply hit search and you will be presented with our meta-meta search® dashboard which enables you to search and compare the best flight fare aggregators side by side in seconds. Our research shows that by comparing multiple flight fare aggregators you are highly likely to save up to 20% off the price of your airline ticket to India. We search KAYAK.ae, Skyscanner.ae, momondo, Cheapflights, KIWI, Jetradar and others to make sure you get the best price possible. We recommend you compare at least 4 separate flight fare aggregators on our dashboard to be sure you are getting the best fare possible. Also on this page you will find average flight times and distances to India from popular United Arab Emirates Airports including Dubai, Abu Dhabi, Sharjah, Al Maktoum, Al Ain, Fujairah and more. We also list the best things to do in India, the weather in India, a map of India, some travel videos of India and most searched for flight fare routes to New Delhi Indira Gandhi International Airport DEL from popular United Arab Emirates airports.

Things to do in India

Pink/red sandstone 'Palace of the Winds'

Historic palace in the middle of a lake

Temple with a flower-like design

600m-high waterfall on the Mandovi River

Ornate memorial for an 1800s maharaja

Historic hilltop fort with a musuem

Art & artifacts in an ornate museum

Valley stretching off the Kullu Valley

Tomb of Akbar the Great

Regal garden with fountains & a museum

Buddhist monastery in a serene setting

Lush green space with many activities

Holy place with thousands of rats

Wildlife tours in a conservation area

Hindu pilgrimage site with many ghats 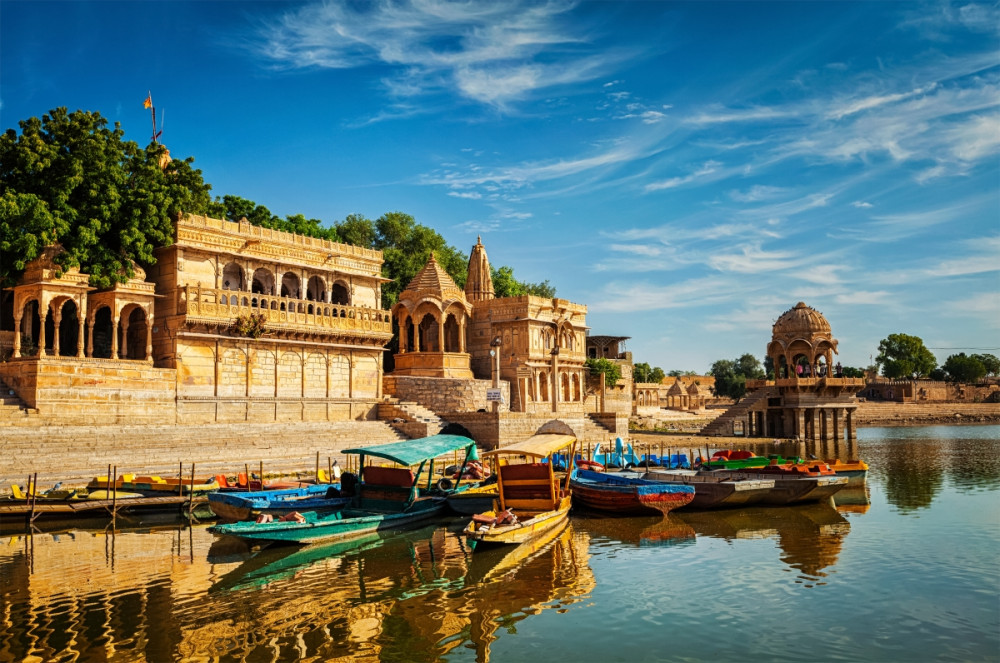 From early times, this mystical ancient land has been the subject of interest from various world powers. It is a land that has numerous landscapes on its territory, from the majestic Himalayan mountains in the North to sunbathed beaches in the South; India is truly a land of extremes. With a rich history of various rules by varying civilisations, India is scattered with ancient relics testifying to this time in history.

India is the birthplace of the religion that the majority of the citizens follow, namely Hinduism. This arose from the Indus Valley almost 5000 years ago. Another major religion to also come out of this region is Buddhism. India has witnessed the likes of Alexander the great, the Pharaoh's and Caesar vying for power over this land.

Islam took hold of India in medieval times, and the era of the sultans was ushered in. This was known as the Moghul period, and the Emperor's of this period ruled for several centuries. Eventually, however, the empire soon began to deteriorate, and the rise of the Western powers, particularly after the Industrial Revolution, led to the shift of power in the world-changing from east to west.

The British Empire soon captured India and ruled it for numerous years until Indian independence, which was granted in 1947. With this new development, India became the largest democracy in the world.

As far as the land of India today is concerned, particularly from a visitor's viewpoint, there are lots to do and see. The Himalayas to the North is a very popular attraction. There are also numerous crowded and bustling cities where one can enjoy just sitting and enjoying the chaos.

Watch in wonderment as cars swing by each other barely missing one another, vying for the attention of the road alongside the cows and buffalos. If you are coming from the west be prepared for a huge culture shock!

One of the most famous monuments in the whole of India, well the whole world for that matter, is the majestic Taj Mahal. This is a magnificent marble tomb built by one of the Moghul emperors to hold the body of his beloved wife for generations to come and see.

It is classified as one of the world's wonders and is an iconic image: a gigantic, beautiful symmetrical structure. This marble building is adorned with priceless jewellery and intricately carved calligraphy. It is a definite must-see for anybody who is visiting that region of India.

India is a fairly safe country to visit for western tourists. However, like everywhere else in the world, the government has asked people to be vigilant and look out for any suspicious behaviour. It is wise whilst there to be cautious from eating food from shabby eating establishments and try to drink only bottled water.

So what are you waiting for? find your cheap flights to India now!