How to find the Cheapest Flight Fares to Saudi Arabia

Discover and compare cheap flight fares and flexible date options to Saudi Arabia, King Abdulaziz Intl Airport, JED in 2022/2023 with FlightsFinder departing from the United Arab Emirates as well as the rest of the world. The GEO coordinates for King Abdulaziz Intl Airport are 21.6796, 39.156502, located in the country of Saudi Arabia. To find the cheapest flight fares to Saudi Arabia simply enter the departure airport you wish to fly from and then choose your travel dates. The more flexible you are with your travel dates the cheaper your flight fare to Saudi Arabia can potentially be. We give you the ability to look for flexible flight fares to Saudi Arabia 3 days before and after your travel dates or if you prefer you can browse our powerful flexible flight calendar to see prices in the entire month or even the entire year of 2022/2023. Once you have identified the cheapest days to fly to Saudi Arabia simply hit search and you will be presented with our meta-meta search® dashboard which enables you to search and compare the best flight fare aggregators side by side in seconds. Our research shows that by comparing multiple flight fare aggregators you are highly likely to save up to 20% off the price of your airline ticket to Saudi Arabia. We search KAYAK.ae, Skyscanner.ae, momondo, Cheapflights, KIWI, Jetradar and others to make sure you get the best price possible. We recommend you compare at least 4 separate flight fare aggregators on our dashboard to be sure you are getting the best fare possible. Also on this page you will find average flight times and distances to Saudi Arabia from popular United Arab Emirates Airports including Dubai, Abu Dhabi, Sharjah, Al Maktoum, Al Ain, Fujairah and more. We also list the best things to do in Saudi Arabia, the weather in Saudi Arabia, a map of Saudi Arabia, some travel videos of Saudi Arabia and most searched for flight fare routes to King Abdulaziz Intl Airport JED from popular United Arab Emirates airports.

Things to do in Saudi Arabia

Massive mosque that is part of the Hajj

Grand 19th-century fort with a museum

Arched skyscraper with an observatory

Mosque built by the prophet Muhammad

Spotlighted fountain in the Red Sea

Mountain for hiking to a famous cave

Large valley with the country's capital

Museum/culture center in a historic home

A variety of animals & train rides

Cultural center with a striking design

Holy stone in the Kaaba

Museum within a sprawling palace complex

Park and garden and forest

Rotating globe sculpture that lights up

Park and garden and chalet

Tower with offices, a restaurant & more

Green space with a beach & playground 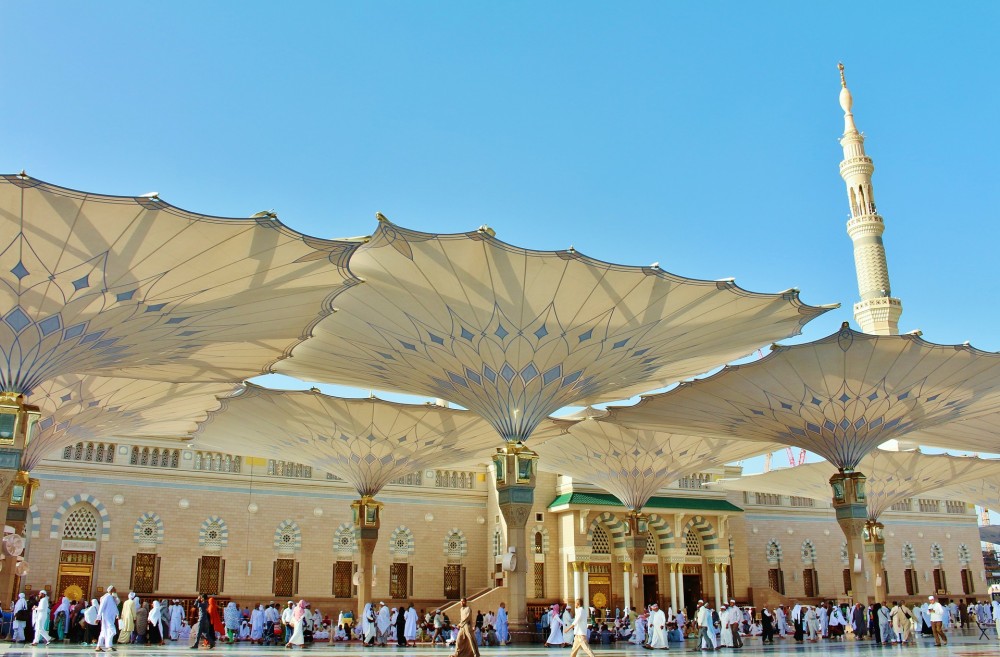 Saudi Arabia is not known as a particularly popular holiday destination for the world's population. It receives thousands of visitors annually, but very few of that number are actually made up of tourists. Saudi Arabia is home to the ancient and holy cities of Mecca and Medina.

These two destinations alone pull in millions of people every year due to the injunction of Islam that every Muslim must make the pilgrimage there at least once in their lifetime if able.

Saudi Arabia is quite a traditional country with a kingship that has been in place for decades. The infrastructure of the country is generally well developed and contains numerous highrise buildings, gigantic shopping malls and some ancient sights.

Foreign visitors usually come for purposes of a business, and there are very few leisure facilities geared towards the usual hedonistic pleasures found in the Western world. Riyadh is the modern capital of Saudi Arabia and is also an economic centre. One of the major sights to see in the capital is the Geodesic Dome, holding the title of one of the tallest buildings in the region.

There are a number of things to do if wanting to pay a trip to this intriguing and conservative country. For starters, the marketplace is a bustling environment with everything on sale from intricate rugs to exotic spices. Sights include the biggest camel market and ancient ruins in al Diraiyah.

Jeddah is another famous city within Saudi Arabia and is quite a popular retreat for visitors coming to the holy cities. Again, this is a modern metropolis with numerous restaurants, hotels and shopping venues available for visitors to peruse.

Saudi Arabia is extremely wealthy and contains some of the richest individuals in the world, usually found amongst the ranks of the Royal family. This wealth comes on the back of the discovery of oil in the region, making it an important strategic partner of nations in the west.

The presence of unscrupulous oil companies, corruption within the ruling classes and mass unemployment has caused significant resentment amongst the nation's masses. This situation has led to armed groups rising in certain regions of the country and can be fairly unsafe for Westerners in certain areas.

Arabic is the official language of Saudi Arabia, however, English is widely spoken in the country as well. It is generally safe health-wise, however, it is a good idea to drink from bottled water and only consume food from established and good hotels.

Medical standards and facilities are good but can be quite expensive. Like everywhere else in the world, it is advised to check travel conditions upon your decision to depart to this region.

So what are you waiting for? find your cheap flights to Saudi Arabia now!