How to find the Cheapest flights to Egypt

Find the cheapest flights and flexible date options to Egypt, Cairo International Airport, CAI in 2022/2023 with FlightsFinder departing from Israel as well as the rest of the world. The GEO coordinates for Cairo International Airport are 30.12190056, 31.40559959, located in the country of Egypt. To find the cheapest flights to Egypt simply enter the departure airport you wish to fly from and then choose your travel dates. The more flexible you are with your travel dates the cheaper your flight to Egypt can potentially be. We give you the ability to look for flexible flights to Egypt 3 days before and after your travel dates or if you prefer you can browse our powerful flexible flight calendar to see prices in the entire month or even the entire year of 2022/2023. Once you have identified the cheapest days to fly to Egypt simply hit search and you will be presented with our meta-meta search® dashboard which enables you to search and compare the best flight aggregators side by side in seconds. Our research shows that by comparing multiple flight aggregators you are highly likely to save up to 20% off the price of your airline ticket to Egypt. We search il.KAYAK.com, Skyscanner.co.il, momondo, Cheapflights, KIWI, Jetradar and others to make sure you get the best price possible. We recommend you compare at least 4 separate flight aggregators on our dashboard to be sure you are getting the best deal possible. Also on this page you will find average flight times and distances to Egypt from popular Israeli Airports including Ben Gurion, Haifa, Ramon and more. We also list the best things to do in Egypt, the weather in Egypt, a map of Egypt, some travel videos of Egypt and most searched for flight routes to Cairo International Airport CAI from popular Israeli airports.

Things to do in Egypt

Site of the Great Pyramids & the Sphinx

Valley of the Kings

Massive monument from 13th-century BC

The Temple of Horus at Edfu

Ptolemaic temple with a vast statue

Valley of the Queens

Coptic place of worship with icons

Circa 25th-century BCE pyramid at Giza

Massive obelisk in an ancient quarry

Burial chambers from the 2nd century

Egyptian history in an Italianate palace

City Of The Dead Cairo Egypt

Gulf of Aqaba islet with an old fortress

Scenic island with the temple of Isis

Aquarium & zoo with a restaurant

Temple of Seti I

Range of hills with the Cave Church

Historical landmark once used for burial

Flights from Eilat, Israel - Eilat Airport (ETH) to Egypt (CAI) - The flight distance between these airports is 217 miles (348 kilometres). The direct flight time is roughly 58 minutes.

Flights from Ramon, Israel - Ramon Airport (ETM) to Egypt (CAI) - The flight distance between these airports is 218 miles (350 kilometres). The direct flight time is roughly 59 minutes.

Flights from Ovda, Israel - Ovda Airport (VDA) to Egypt (CAI) - The flight distance between these airports is 212 miles (340 kilometres). The direct flight time is roughly 58 minutes. 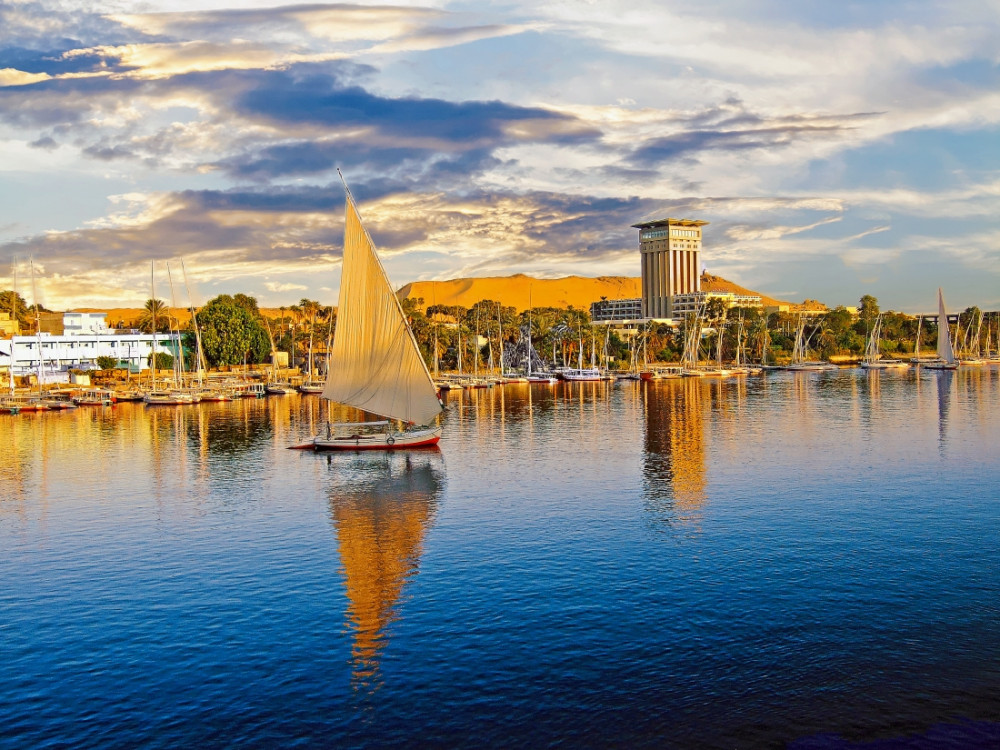 Egypt is the strange and mysterious gateway to the African continent.

This is the country of legend, myth and unimaginable history - with building techniques and practices that were so advanced it is easy to see how the rumour began that the ancient Egyptians were in fact from outer space.

For as long as travel has existed, Egypt has drawn the curious. The earliest records of foreigners arriving to simply see the sights are as far back as 500 years before Christ, and the tourism industry in Egypt shows no signs of slowing.

The pyramids, perched oddly on the outskirts of Cairo never fail to lose their appeal. Nor does the Sphinx, despite its crumbling face and Nile cruises are a magical way to spend a day or a week.

The Red Sea is a warm marine experience that nicely offsets the heat and for those with a religious bent, a camel ride to Mount Sinai is unmissable.

The capital, Cairo, is awash with the sights, sounds and smells of a living Egypt: The bustling combination of old-world street vendors and glassy, modern buildings and infrastructure. Egypt is a country that is well aware of her tourism dollar and all of the locals are at least bilingual, with many speaking at least three languages.

So what are you waiting for? find your cheap flights to Egypt now!