Flights to Frankfurt am Main, Germany

How to find Cheap Flight Deals to Germany

Obtain cheap flight deals and flexible date options to Germany, Munich/ Munchen International Airport, MUC in 2022/2023 with FlightsFinder departing from Ireland as well as the rest of the world. The GEO coordinates for Munich/ Munchen International Airport are 48.35380173, 11.78610039, located in the country of Germany. To find the cheapest flight deals to Germany simply enter the departure airport you wish to fly from and then choose your travel dates. The more flexible you are with your travel dates the cheaper your flight deal to Germany can potentially be. We give you the ability to look for flexible flight deals to Germany 3 days before and after your travel dates or if you prefer you can browse our powerful flexible flight deals calendar to see prices in the entire month or even the entire year of 2022/2023. Once you have identified the cheapest days to fly to Germany simply hit search and you will be presented with our meta-meta search® dashboard which enables you to search and compare the best flight deal comparison sites side by side in seconds. Our research shows that by comparing multiple flight comparison sites you are highly likely to save up to 20% off the price of your airline ticket to Germany. We search KAYAK.ie, Skyscanner.ie, momondo.ie, cheapflights.com, KIWI, Jetradar and others to make sure you get the best price possible. We recommend you compare at least 4 separate flight deal comparison sites on our dashboard to be sure you are getting the best price possible. Also on this page you will find average flight times and distances to Germany from popular Irish Airports including Dublin, Cork, Shannon, Ireland West, Kerry, Donegal and more. We also list the best things to do in Germany, the weather in Germany, a map of Germany, some travel videos of Germany and most searched for flight deals to Munich/ Munchen International Airport MUC from popular Irish airports.

Things to do in Germany

Square at the heart of city's history

16th-century ruined castle on a hillside

Hilltop castle with an opulent interior

Iconic palace of Frederick the Great

Memorial to the Murdered Jews of Europe

Tropical-themed resort with a rainforest

Iconic town hall since 1405 with balcony

Lutheran church with a landmark tower

Displays on history of the Berlin Wall

Gothic church with a gem-studded relic

Neo-Gothic castle perched on a cliff-top

Landmark rock & statue on the Rhine 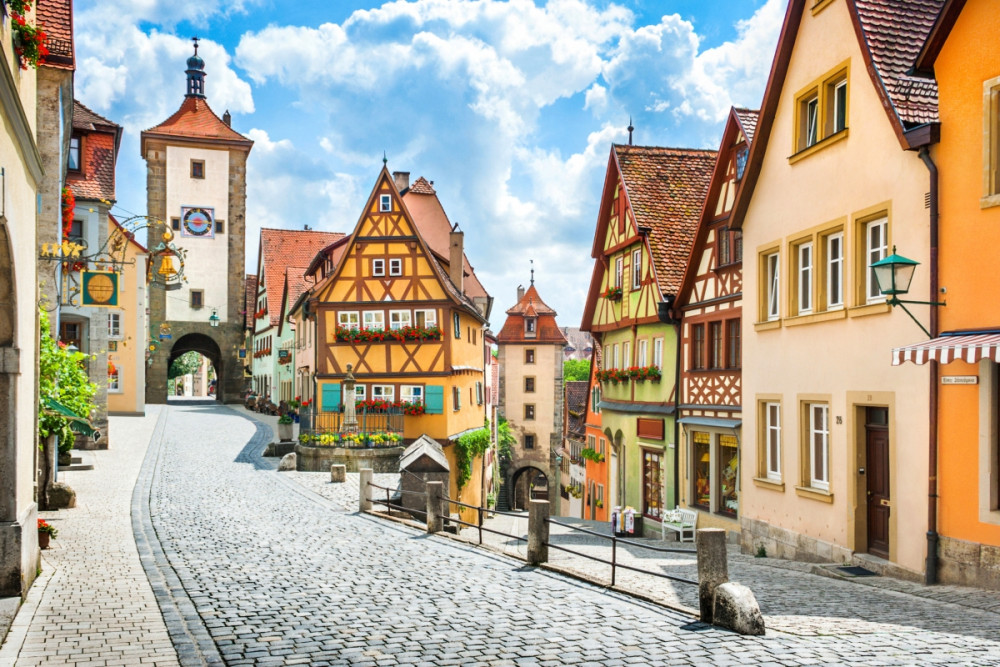 A Short Guide to Germany

German residents and visitors are moving ahead into the new century, leaving in its wake a history of both division and dictatorship. The country’s inhabitants have begun to embrace its new liberalism government and redefined its cultural identity. However, no matter how hard the countrymen and women try to change their history, visitors can’t shake the feeling of being moved emotionally by Germany’s past and how it effects its people.

Germany lies in the heart of Europe and is surrounded by nine other countries; it’s considered a gateway for vacationers looking to get from one nation to another. Germany’s land is large with various castles that lie below mountains covered with snow, river valleys, forests and medieval villages still busy with activity. In fact, this is a country full of fairy tales. After all, Little Red Riding Hood took a walk in the woods, Sleeping Beauty woke up and farmland minstrels went to Bremen to develop into musicians.

Visitors can also enjoy the cities in Germany. If a visitor likes beer, Munich’s Oktoberfest is the place to be, as it here that over a million liters of beer are consumed. It’s also the place visitors can find out about the true German celebrations and 'gemutlichkeit' (this word is used by German inhabitants as a environment that is comfortable and sociable).

The city of Berlin is still recovering from the deep scars the division caused. However, there are some historical sights to see including the Brandenburg Gate that leads to the old Berlin Wall. The vivacious nightlife is often reminiscent of the 1920s and 1930s as seen in the Film Cabaret and theater of Brecht or in Marlene Dietrich songs.

So what are you waiting for? find your cheap flights to Germany now!