How to find Cheap Flight Deals to Poland

Obtain cheap flight deals and flexible date options to Poland, John Paul II - Balice Airport, KRK in 2022/2023 with FlightsFinder departing from Ireland as well as the rest of the world. The GEO coordinates for John Paul II - Balice Airport are 50.07770157, 19.78479958, located in the country of Poland. To find the cheapest flight deals to Poland simply enter the departure airport you wish to fly from and then choose your travel dates. The more flexible you are with your travel dates the cheaper your flight deal to Poland can potentially be. We give you the ability to look for flexible flight deals to Poland 3 days before and after your travel dates or if you prefer you can browse our powerful flexible flight deals calendar to see prices in the entire month or even the entire year of 2022/2023. Once you have identified the cheapest days to fly to Poland simply hit search and you will be presented with our meta-meta search® dashboard which enables you to search and compare the best flight deal comparison sites side by side in seconds. Our research shows that by comparing multiple flight comparison sites you are highly likely to save up to 20% off the price of your airline ticket to Poland. We search KAYAK.ie, Skyscanner.ie, momondo.ie, cheapflights.com, KIWI, Jetradar and others to make sure you get the best price possible. We recommend you compare at least 4 separate flight deal comparison sites on our dashboard to be sure you are getting the best price possible. Also on this page you will find average flight times and distances to Poland from popular Irish Airports including Dublin, Cork, Shannon, Ireland West, Kerry, Donegal and more. We also list the best things to do in Poland, the weather in Poland, a map of Poland, some travel videos of Poland and most searched for flight deals to John Paul II - Balice Airport KRK from popular Irish airports.

Things to do in Poland

The Royal Castle in Warsaw

Palace of Culture and Science

Expansive wooded area with many bison

Cobblestone square with many vendors

Clifftop castle amid a dramatic forest

Basilica of St. Mary of the Assumption of the Blessed Virgin Mary in Gdańsk

Panorama of the Battle of Racławice

POLIN Museum of the History of Polish Jews

The National Museum in Warsaw

Palace on the Isle

Symbolic tomb of a national hero

Scenic valley with a walking trail

Expansive amusement park with many rides

14th-century university with a museum

Ruins of Hitler's wartime command base

Hiking & biking through an alpine meadow

Historic cathedral with a giant organ

Formal public park dating back to 1713

Catholic cathedral dating back to 1339

13th-century square at the city's heart

Historic hilltop castle with a tavern

Trail of the Eagle's Nests

Cathedral of St. John the Baptist

Hiking destination on a country border 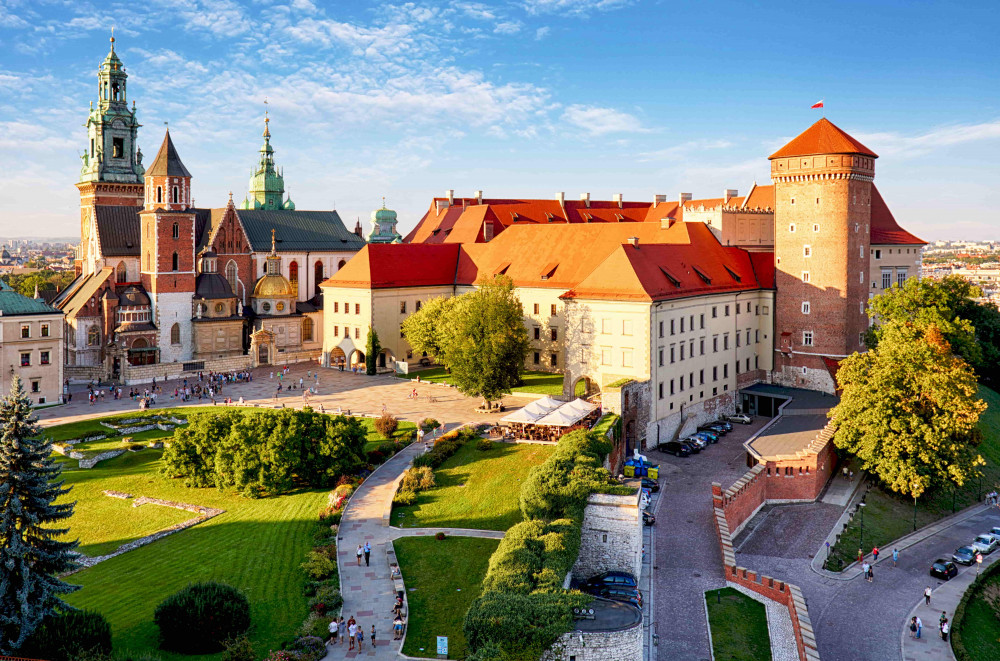 A Short Guide to Poland

Visitors looking to take in the sights of Poland are going to be hit with a sense of extraordinary history of epic calamity and resilience. They can enjoy taking in the sights at any one of the alluring cities and step into the natural countryside magnificence. There’s much visitors can take in of Poland’s historical and tumultuous past including learning about the kings and castles, medieval knights and the battles fought, seeing the destruction of World War II, standing up against Communism and now the present-day successful economy.

Poland was the most devastated country in Eastern Europe during World War II. The country lost about one-quarter of its population and nearly everyone of the Jewish community. The war’s aftermath has largely influenced the country. One big reminder of World War II is the concentration camps in which the Nazis killed scores of Jewish people… men, women and children. War-damaged cities and towns were often rebuilt from scratch and many of the restored architectures are a visible reminder of how much pride the inhabitants of Poland have.

Tourists looking to see Poland’s capital Warsaw will be greeted with a painful reminder of the toll World War II made on it. Warsaw was nearly obliterated but citizens rebuilt and restored the city and its historical buildings, communist-era concrete architectures and added a bit of modern consumerism and fashion to the mix.

Gdañsk is a maritime city that’s home to, not only, the historic garrison at Westerplatte but the Lenin shipyards. It was also the stage for the start of World War II and the Eastern European communism breakdown.

So what are you waiting for? find your cheap flights to Poland now!