Cheapest flight deals to Netherlands (AMS) in 2022/2023 from Ireland

How to find Cheap Flight Deals to Netherlands

Obtain cheap flight deals and flexible date options to Netherlands, Schiphol Airport Airport, AMS in 2022/2023 with FlightsFinder departing from Ireland as well as the rest of the world. The GEO coordinates for Schiphol Airport Airport are 52.30860138, 4.76388979, located in the country of Netherlands. To find the cheapest flight deals to Netherlands simply enter the departure airport you wish to fly from and then choose your travel dates. The more flexible you are with your travel dates the cheaper your flight deal to Netherlands can potentially be. We give you the ability to look for flexible flight deals to Netherlands 3 days before and after your travel dates or if you prefer you can browse our powerful flexible flight deals calendar to see prices in the entire month or even the entire year of 2022/2023. Once you have identified the cheapest days to fly to Netherlands simply hit search and you will be presented with our meta-meta search® dashboard which enables you to search and compare the best flight deal comparison sites side by side in seconds. Our research shows that by comparing multiple flight comparison sites you are highly likely to save up to 20% off the price of your airline ticket to Netherlands. We search KAYAK.ie, Skyscanner.ie, momondo.ie, cheapflights.com, KIWI, Jetradar and others to make sure you get the best price possible. We recommend you compare at least 4 separate flight deal comparison sites on our dashboard to be sure you are getting the best price possible. Also on this page you will find average flight times and distances to Netherlands from popular Irish Airports including Dublin, Cork, Shannon, Ireland West, Kerry, Donegal and more. We also list the best things to do in Netherlands, the weather in Netherlands, a map of Netherlands, some travel videos of Netherlands and most searched for flight deals to Schiphol Airport Airport AMS from popular Irish airports.

Things to do in Netherlands

Huge park with an open-air theater

Park with scale models of a Dutch city

Museum tracing the history of the city

Busy market with an array of offerings

Tours of the waterside Dutch parliament

Canal, market, and canals of amsterdam

17th-century house with a hidden church

European art from Rembrandt to Dali

Memorial to the dead, erected in 1952

African wildlife in a drive-through park

Observation deck with a swing & dining

Canal and canals of amsterdam

Festive pier with an eatery & activities

The St. Bavo Church in Haarlem

Historic tower with a carillon

Railway museum in a 19th-century station

Large, cafe-lined square with a fountain 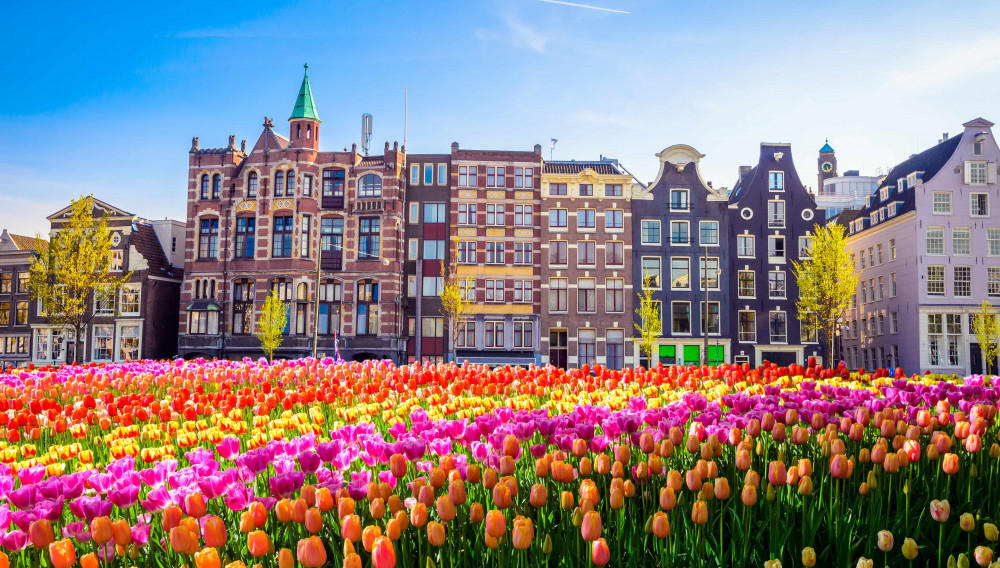 A Short Guide to the Netherlands

When visitors look across the flat lands of Netherlands, they’ll see bicycles, tulips and windmills. Sophisticated urban centers and rural towns can be seen throughout the land along with castle walls, canals and dikes. The most populated region in Netherlands is the Randstad. The urban Randstand extends in a circle from Amsterdam and it encompasses the areas of Delft, Hague, Haarlem, Leiden, Rotterdam and Utrecht. The urban areas are always hopping with all kinds of activities including art scenes, cultural activities, festivals, pubs and restaurants.

The cultural legacy that touches the Dutch life is traced back in time during the 1600s. At the time, the Netherlands subjugated the globe culturally and frugally. The Dutch East India Company set up trade links to the East and West Indies, which helped to bring a large quantity of cultural influences along with commodities. When Frans Hals, Rembrandt and Jan Vermeer (the Dutch Masters) took hold in the country, the Golden Age attained its high point. Visitors can see any one of their paintings in the cities’ many galleries and museums.

Whenever visitors come to the Netherlands, they’ll end up traveling to its capital, Amsterdam. However, the parts outside the Randstad is usually unaffected by the tourism industry. The southern regions of the Netherlands have been altered by the shifting sand and heath moors, which is best encountered when visiting Hoge Veluwe National Park. Further south of this area is Maastricht, which lies between the Belgian and German borders.

So what are you waiting for? find your cheap flights to Netherlands now!