Back to Blog
Share
When they aren't in the air, defying gravity and flying human beings across the globe for various reasons, aircraft are usually housed in hangars — gigantic structures built in order to protect these incredibly expensive modes of transport from the elements when not in use and/or to offer a covered space for their production, maintenance and repair. Given their size, many aircraft hangars are stunning pieces of engineering themselves, whilst others are simply fascinating for different reasons.

Here are seven examples that definitely deserve a mention. 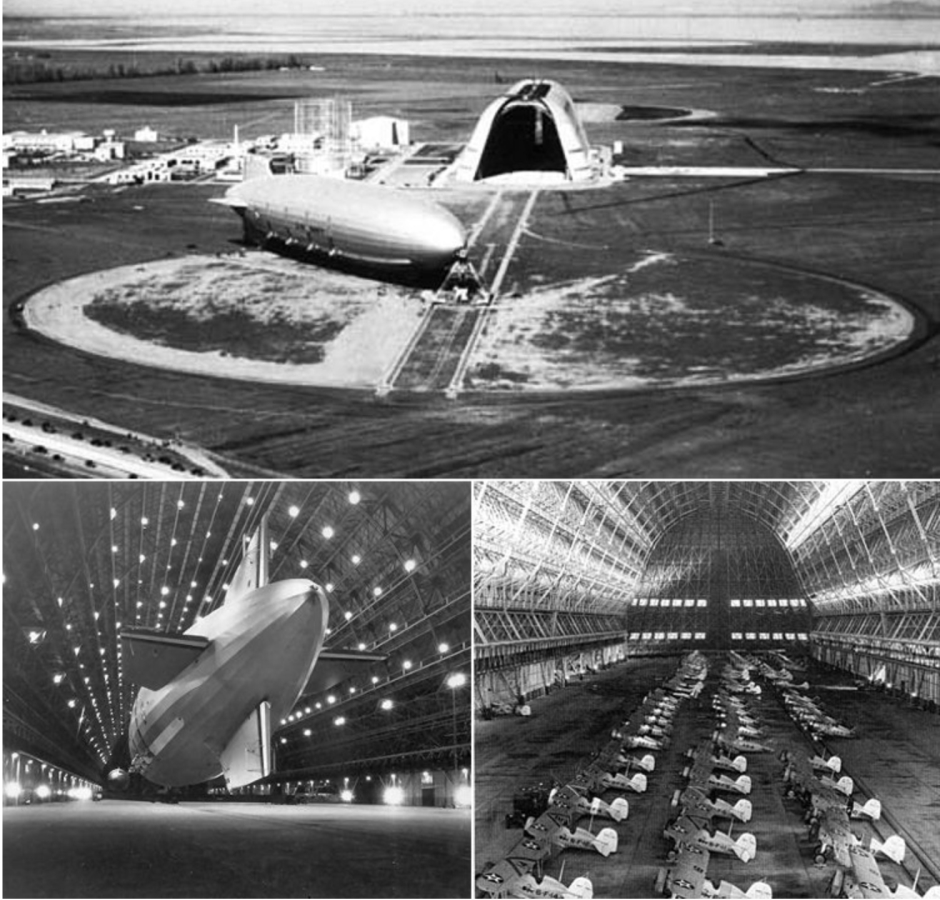 Above: When completed in the 1930s, Hangar One at Moffett Federal Airfield proudly became the world's largest building not home to interior supports, its stunning curved walls surrounding a covered area measuring 32,000m², the aircraft within protected by enormous steel doors that weigh over 200 tons apiece. The hangar's intended purpose was to house the USS Macon airship, and it did just that, briefly; today, its future is undecided, although it is at least listed on the National Register of Historic Places. 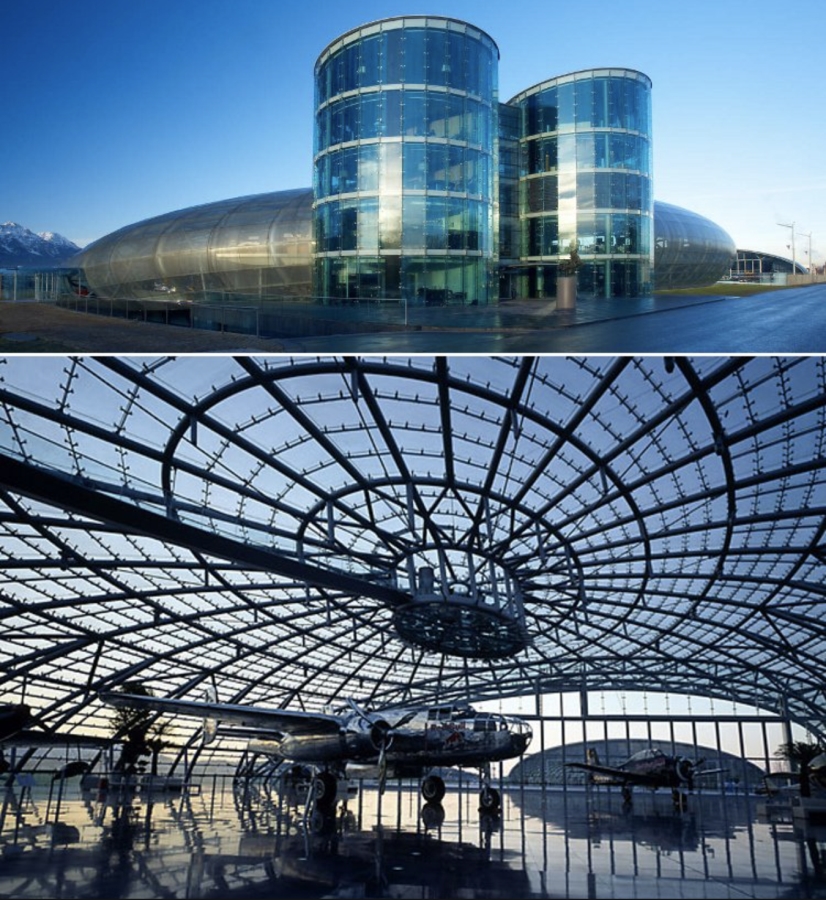 Above: Designed by architect Volkmar Burgstaller in the late 1990s, the incredible piece of architecture that is Hangar-7 in Salzburg was built in order to provide a safe haven for the many rare and valuable aircraft owned by the Flying Bulls, an association of enthusiasts, pilots and mechanics whose growing collection of aeroplanes could no longer be housed in the adjacent airport. The result is the beautiful building seen above which is now used as both a hangar when the aircraft aren't being paraded at events and museum space for the general public should they wish to visit. 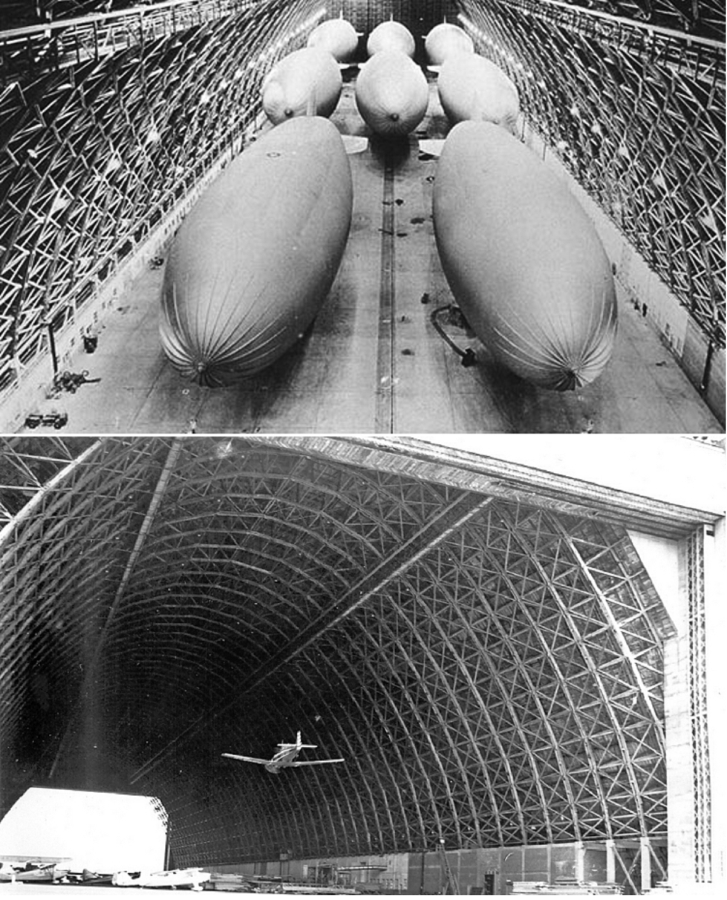 Above: Possibly still the world's largest clear-span wooden structure, Oregon's Hangar B was built in 1942 by the US Navy and originally housed various military aircraft (aeroplanes and blimps) at Naval Air Station Tillamook. Today, the impressive building is home to a collection of World War II aircraft known as  Tillamook Air Museum. 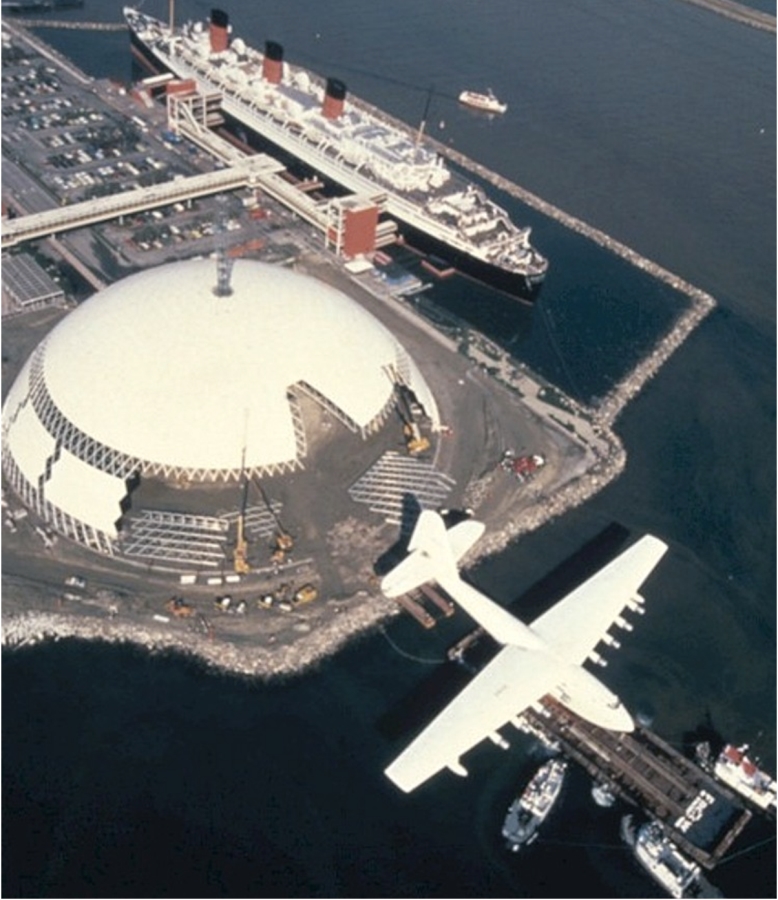 Above: These days the enormous white dome at Long Beach is used as a terminal for cruise ships, but back in the day it was used as a hangar for an entirely different form of transport: Howard Hughes' Spruce Goose, an aeroplane which claims the largest wingspan of any aircraft in history, is still the largest flying boat ever made, and which flew just once, in 1947. The hangar itself is also impressive, in that it is the 7th largest geodesic dome in the world — an unsurprising fact considering the gigantic bird it once held. 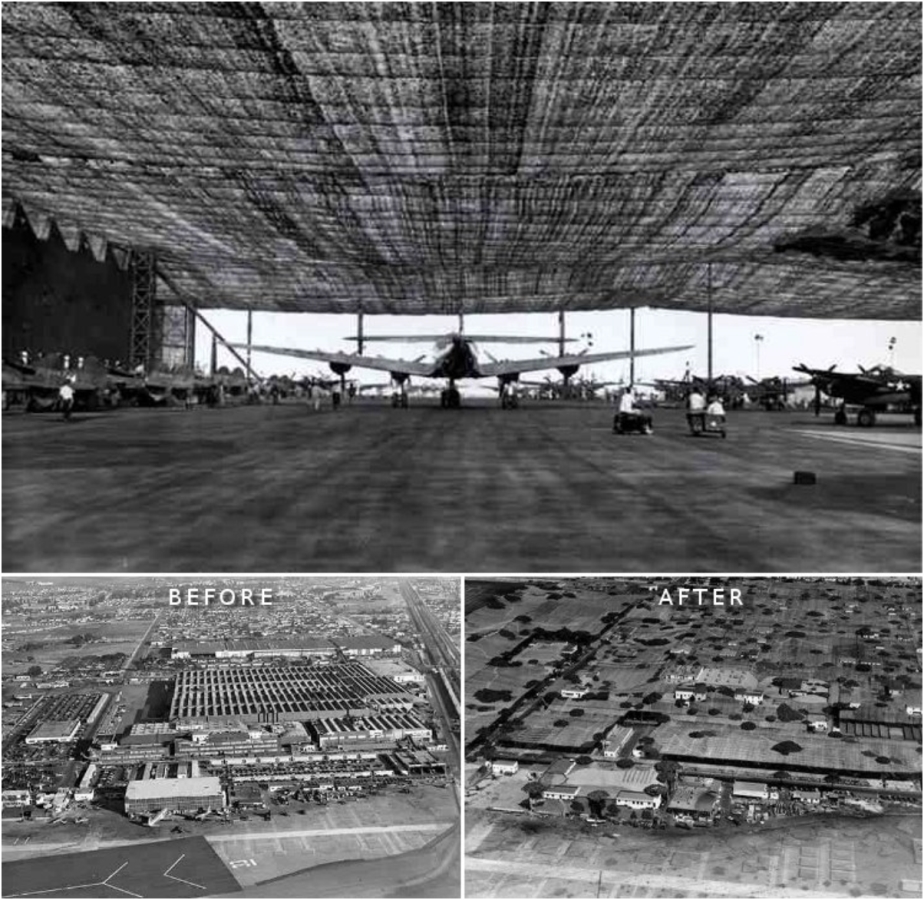 Above: During World War II, in an effort to disguise the facility and ward off enemy fire, officials at Burbank's Lockheed Air Terminal (now known as Bob Hope Airport ) took the unusual but highly effective step of covering the entire airport with strategically placed camouflage netting. The subsequent view from the air can be seen above. As seen in the first image, the extensive overhead netting also resulted in dozens of makeshift aircraft hangars, perfect for protecting the many military planes that previously would have remained in plain sight. 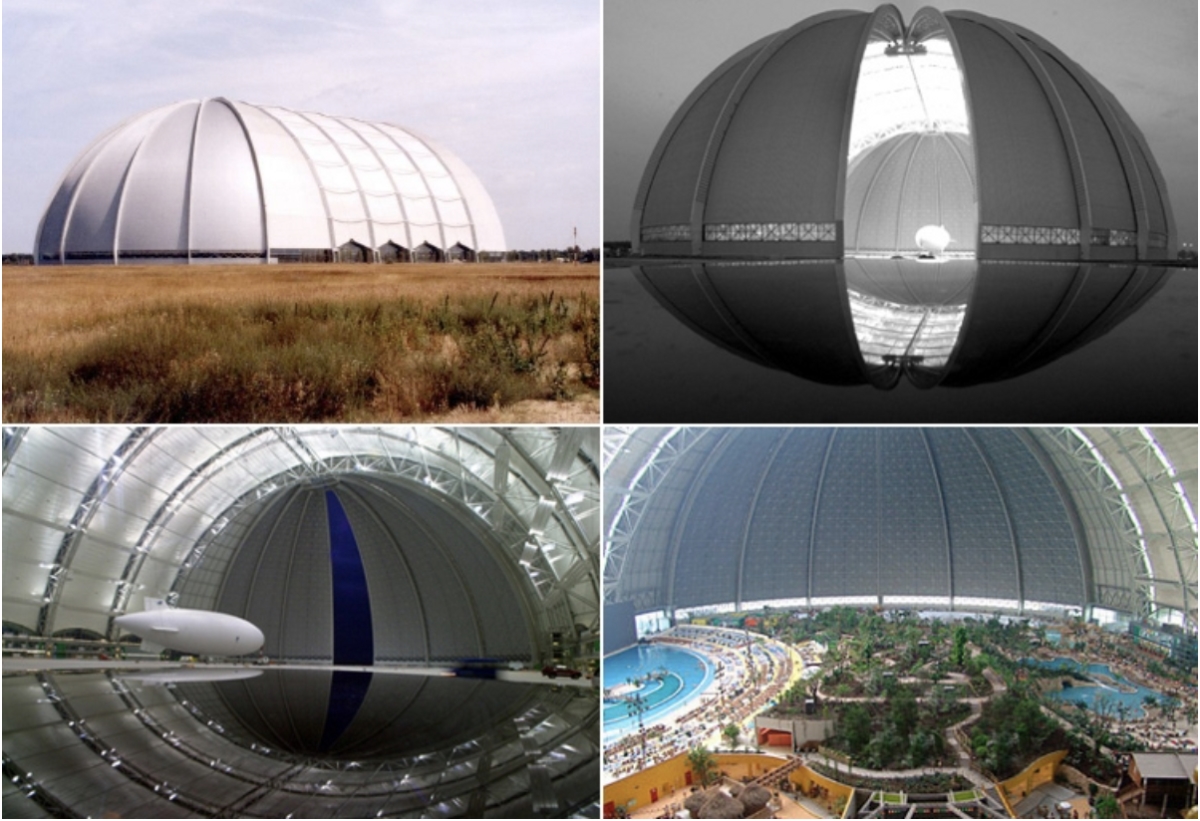 Above: One of the largest buildings on Earth, the originally-named Aerium hangar in Germany is so gigantic that the Eiffel Tower could be contained within, albeit rested on its side. The hangar was built by a company named Cargolifter AG in the 1990s, to house the production and operation of a new airship: the CL 160. Unfortunately for Cargolifter AG, the CL 160 never saw the light of day; however in 2004, following the sale of the premises, Aerium re-opened as a holiday resort named Tropical Islands. 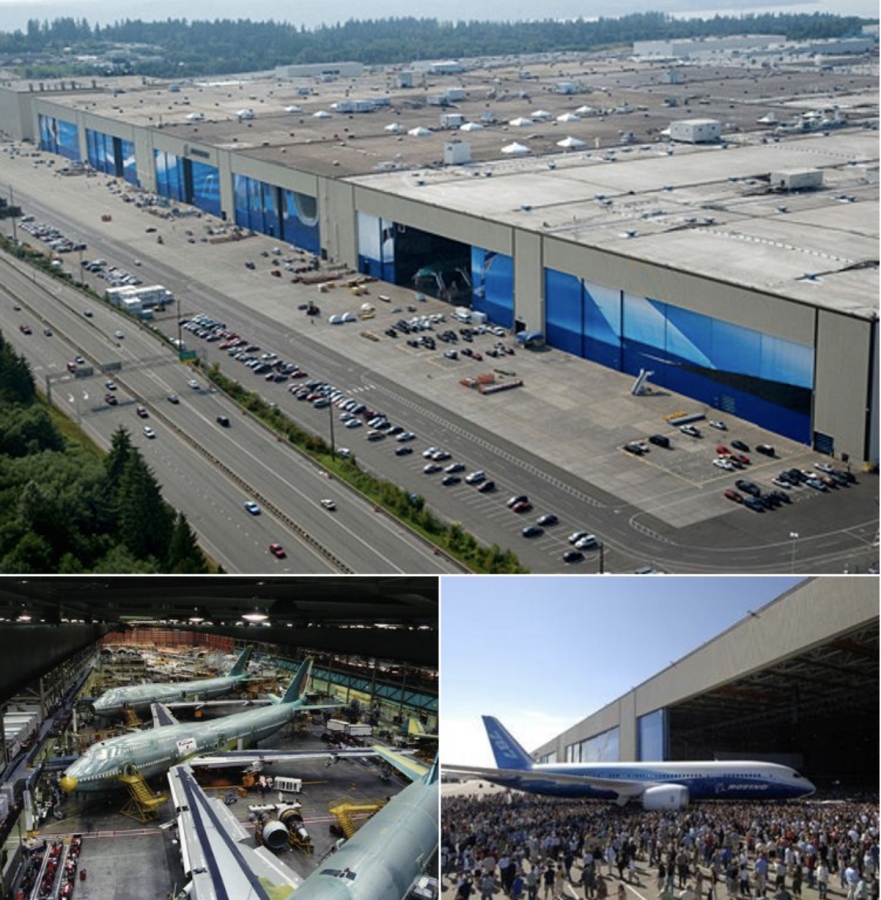 Above: Not a hangar in the strictest sense, but rather an aircraft assembly plant, the Boeing Everett Factory in Washington deserves mention here purely due to its mind-boggling dimensions — and besides, it does house the aeroplanes for a short period. The facility is used by Boeing to manufacture various planes, including the 747, and boasts the highly impressive title of 'largest building in the world, by volume'. In fact, so large is the hangar that, prior to a new air-circulation system being installed to combat the problem, clouds once formed inside. Some quick facts: 25'000 people work in the building; the building could accommodate approximately 2100 average-sized homes; and each of the hangar's doors is roughly the size of an American football pitch.

Ten of the World's Most Haunting Abandoned Airports

Here is an article that we have created which provides information about some of the most haunting abandoned airports from around the World with some fantastic pictures.

As we all dream of getting back to travelling, we interview travel blogger Alyssa Ramos about her experiences visiting 107 countries.