7 Fantastic Uses for a Retired Airplane

Come the end of their flying careers, not all airplanes are destined to rust away in boneyards like the one seen above (this yard in particular being AMARG in Tuscon). Thanks to the creative efforts of a growing number of people, disused aircraft are being snapped up at an impressive rate, only to be repurposed and used in a surprising variety of ways. With adaptations ranging from living spaces through to children's playgrounds, all are saving these once majestic machines from a lonely death and providing the surrounding environment with a unique and useful reminder of their previous days above ground.

Here are some of our favourite examples: 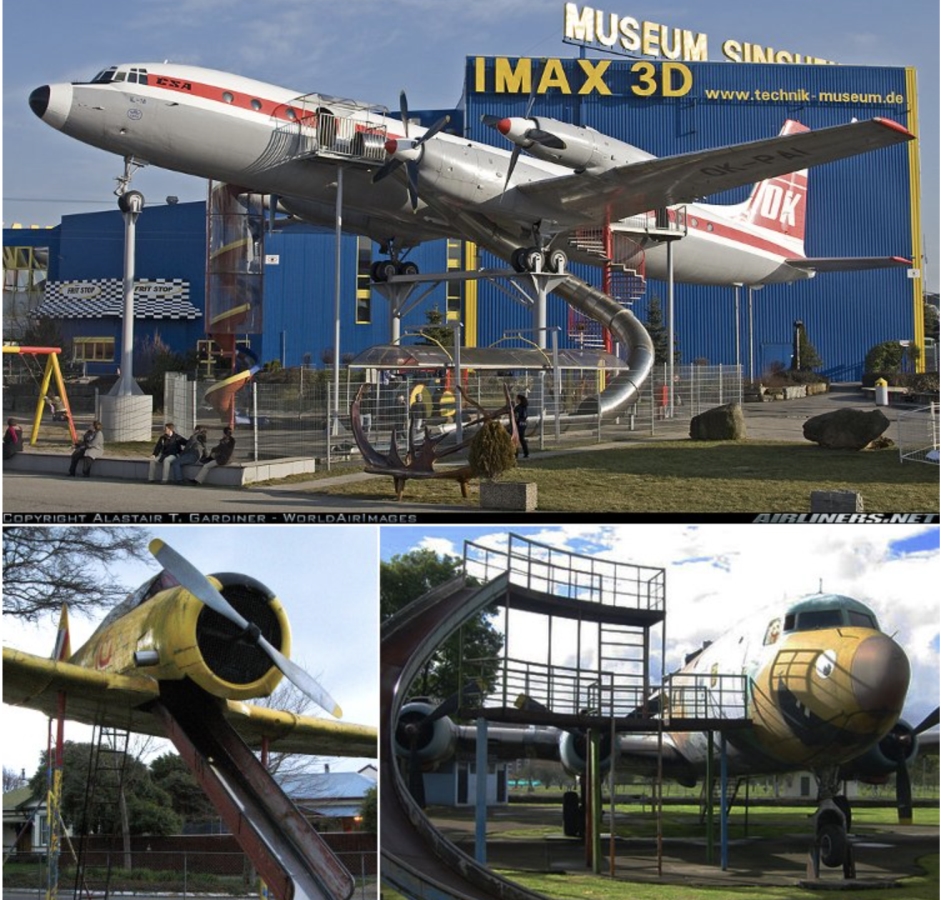 Above : It's really amazing to discover that some disused planes are even being modified and used as play areas for children around the globe; adding a truly exciting twist to the lives of youngsters. Here we have just three examples, located in (from top, clockwise) Germany, Ecuador, and New Zealand. If only this sort of adaptive reuse were seen more often. 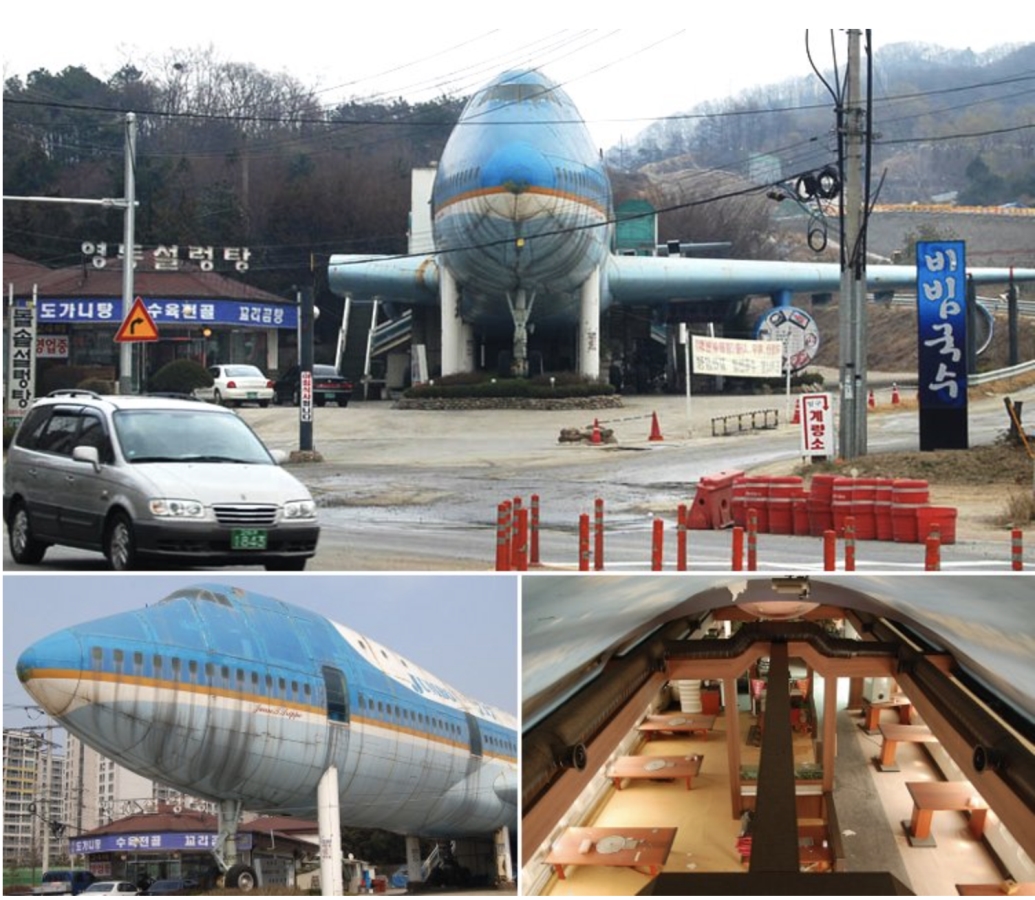 Above : This enormous disused 747 was, until 2009 at which point it was closed down, sitting quietly amongst the traffic in South Korea, quite often full of people eating dinner in its on-board restaurant. And it isn't as unique as you'd think: a surprising number of airplane-restaurants have been reported over the past few years, a few of which can be seen over at Dark Roasted Blend . 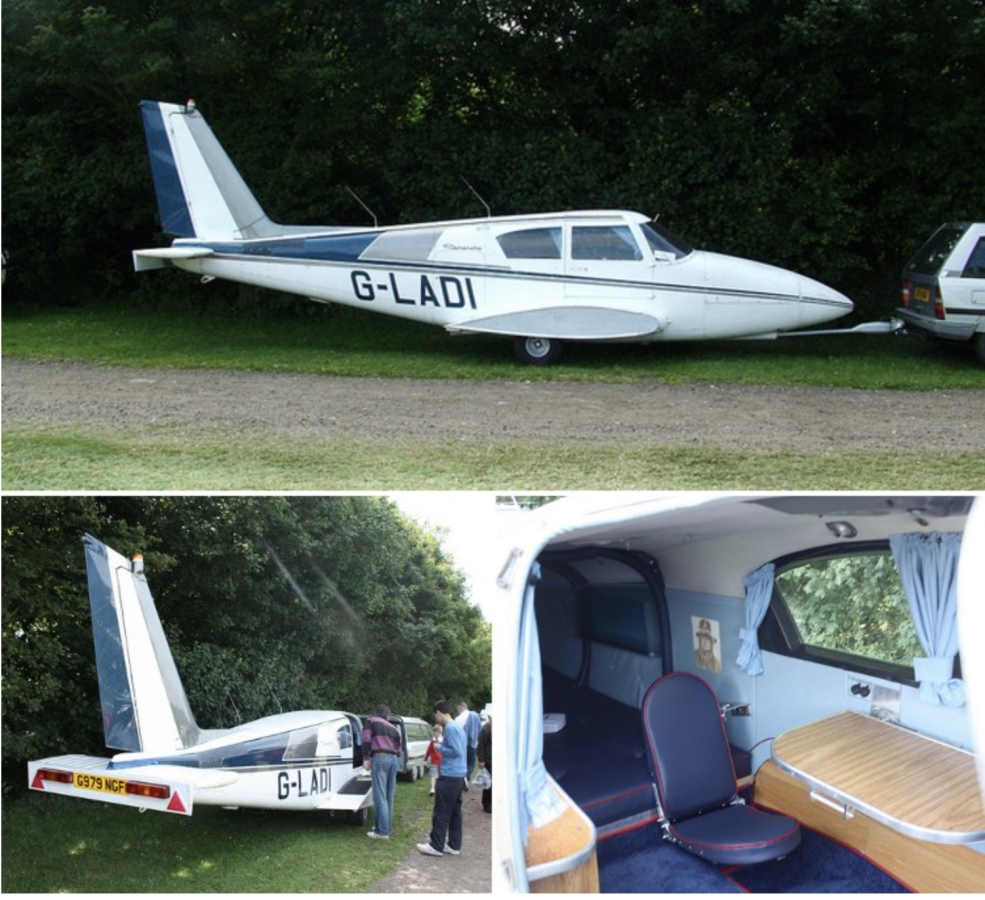 Above : This old Piper Twin Comanche, spotted last year at a classic car show in Bromley, England, has been converted into a caravan, of all things. Thankfully its wings have been clipped to save it causing havoc on the roads, although its appearance must still attract an incredible amount of attention. 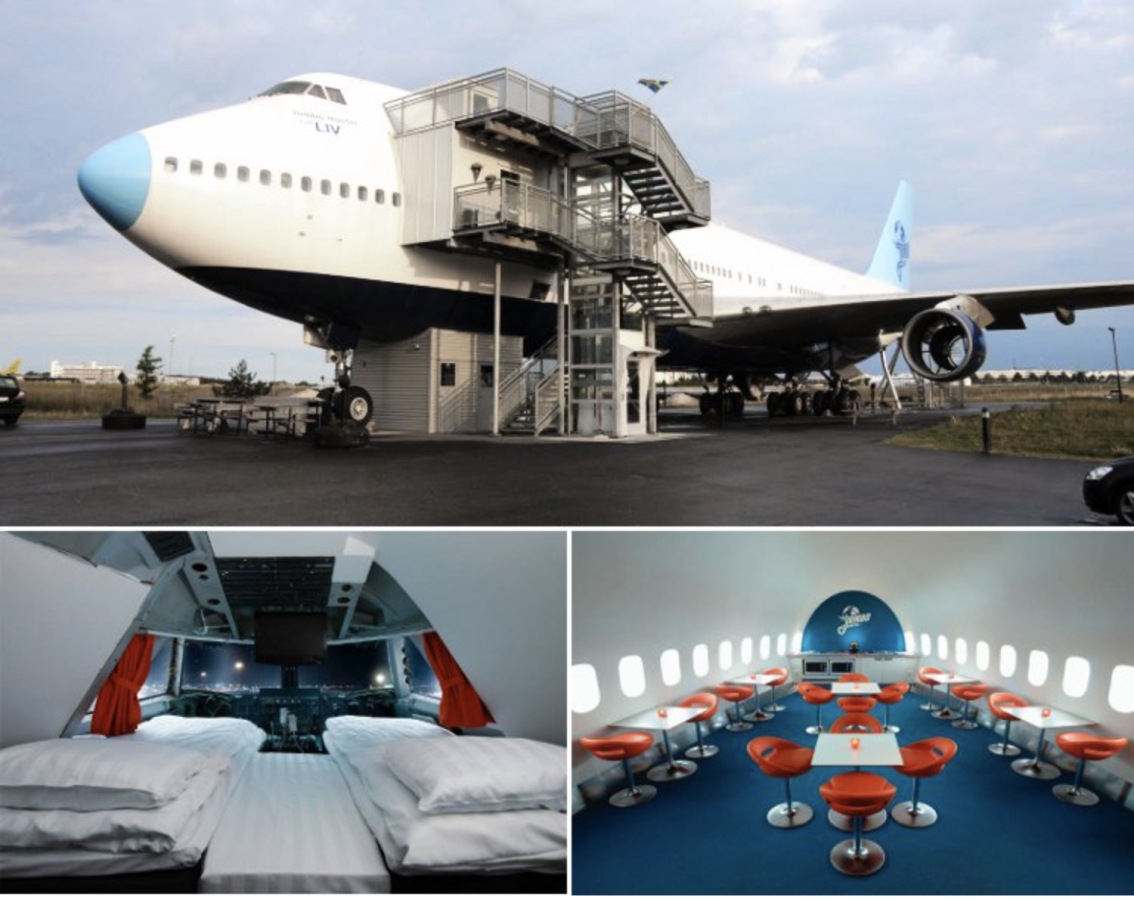 Above : Jumbo Stay is an incredible looking 27-room hotel located near the entrance of Sweden's Arlanda Airport that lives inside the body of an old decommissoned Boeing 747. Opened by Oscar Diös in 2008, the hotel's interior is surprisingly inviting and the bedrooms all welcoming; the most appealing surely being the one pictured above, located in the cockpit. Visit their website for more details. 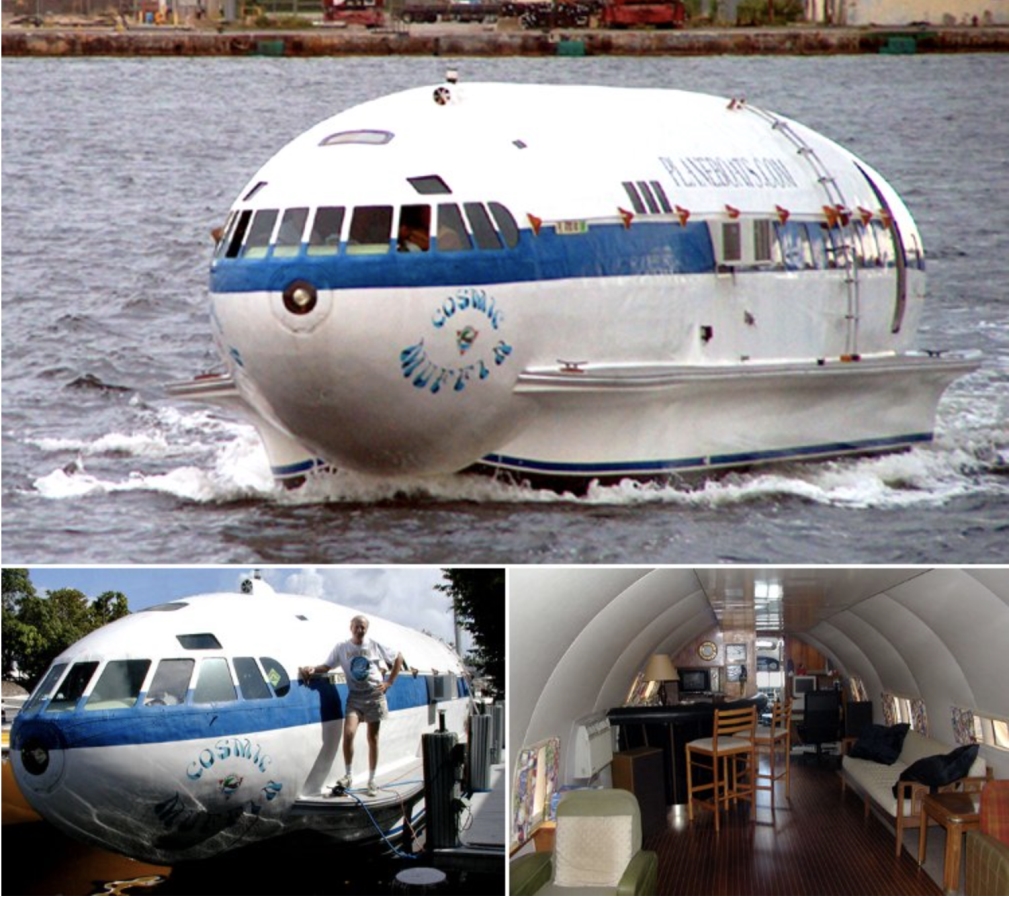 Above : The Cosmic Muffin is notable for a couple of reasons, the first and most obvious of which is that it is in fact a boat, crafted from the front-end of an airplane. However the "Muffin" also boasts a rich history, having once been (when in one piece of course) the Boeing B-307 owned by the legendary aviator Howard Hughes. It is now owned and floated by Dave Drimmer, who maintains a website for the craft here  [Warning: Autoplaying Music Ahead]. 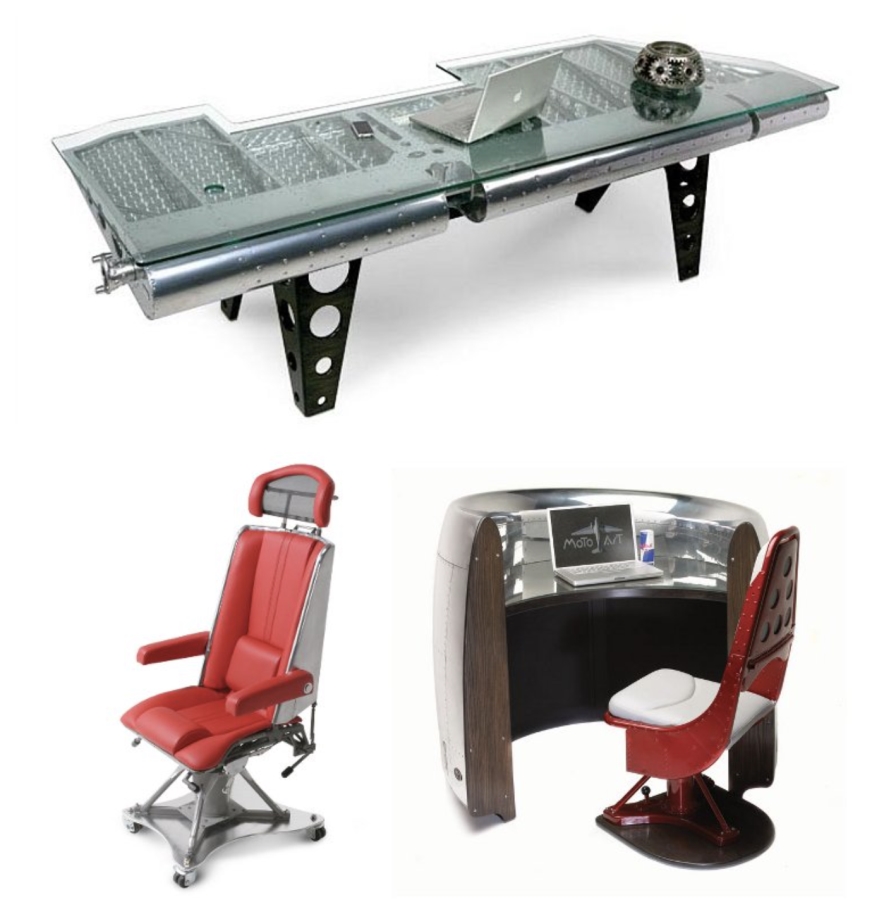 Above : Should you ever be on the lookout for furniture created from aircraft parts, you could do far worse than visit the website of Donovan Fell III, a man whose business ( Motoart ) sees him creating some truly amazing pieces of furniture from wings, turbines and ejector seats on a daily basis. 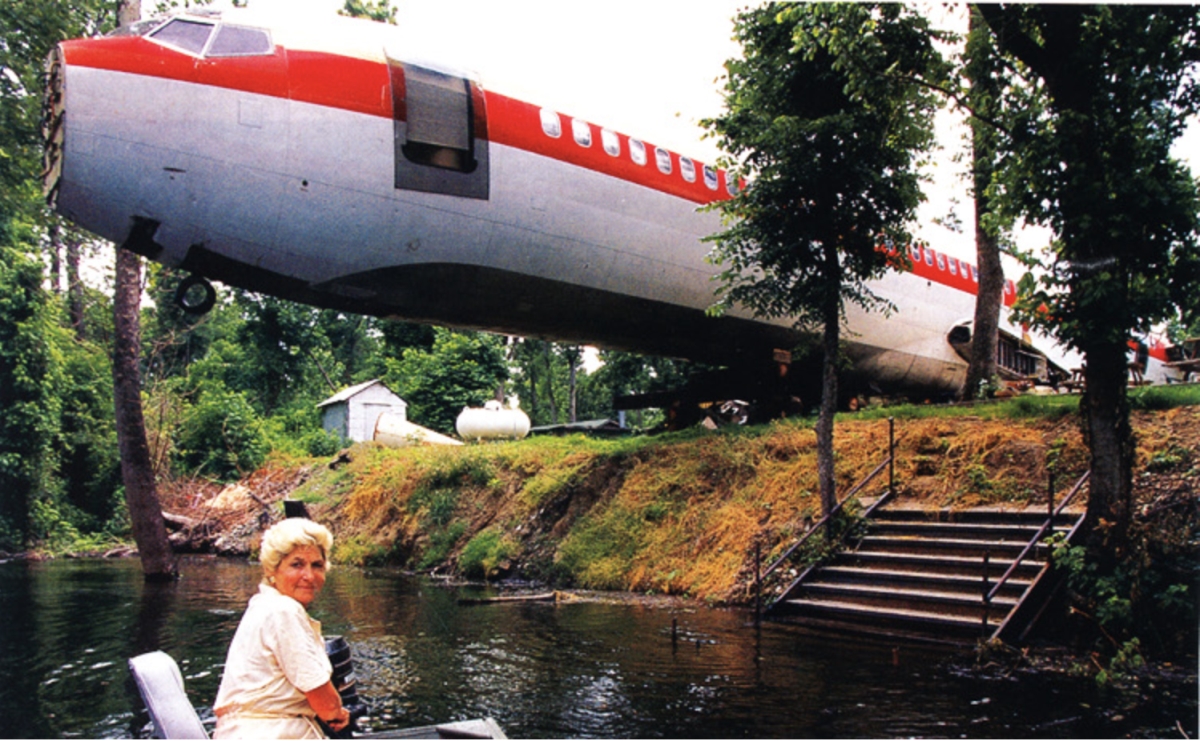 Above : Some people even live on planes, and I'm not talking about businessmen/women who travel so much that they're seemingly forever on aircraft. No, some people have decided to buy old planes, gut them, and refurbish them so as to be habitable on a full-time basis. In this photo we have JoAnn Ussery, a lady who bought a 727 in 1994 and has lived in it very happily ever since. There are plenty more similar abodes, some of which can be seen here .

Ten of the World's Most Haunting Abandoned Airports

Here is an article that we have created which provides information about some of the most haunting abandoned airports from around the World with some fantastic pictures.